Written by CommunityAlerts.ie on 28 September 2016. 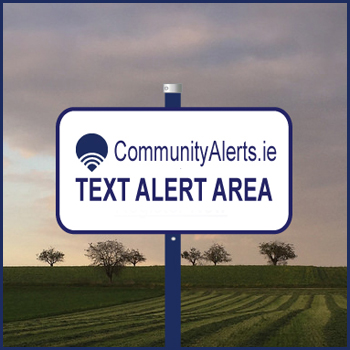 You may be wondering where Community Text Alert started? This blog is aimed at giving you a brief insight into its foundation, purpose and how the original scheme has changed and developed in subsequent years. The Community Text Alert scheme was originally developed by the Community Relations Bureau of An Garda Síochána in conjunction with Muintir na Tíre in 2007. This was developed as a result of a spike in rural crime and a growing concern for the well-being and safety of rural communities. The most recent Community Text Alert scheme, was relaunched as part of a national strategy in 2013, in partnership with some associated state agencies such as Neighbourhood Watch, An Garda Siochana and others.

The Community Text Alert schemes foundation has remained the same over the years, in that it operates as a community safety programme aimed at rural / remote areas, with an emphasis on older and vulnerable people. It operates as a partnership between the local community and An Garda Síochána. It works on the principle of shared responsibility for crime prevention and reduction. An Garda Síochána play a fundamental and central role to the scheme, in protecting the community, and by ensuring people are allowed to live peacefully. The emphasis is on preventing crime through active partnerships with communities, and it is with the continued assistance of communities nationwide that we can all continue to combat crime. Community Text Alerts has significantly grown and evolved since its original launch in that it is now used for not just crime alerts alone but also encompasses other relevant information alerts specific to your community. This includes all parts of your local community, albeit a housing estate or as part of a local sports group. Additional information alerts which are used are local county council notifications, weather alerts and local events and happenings.

The Gardai play a key role and have remained a central support to the scheme. An Garda Síochána give an added commitment at every level, to promote and support the establishment and operation of Community Alert groups. This is done by:

CommunityAlerts.ie was established by Pin Point Alerts Ltd in 2013, to coincide with the launch of a national strategy for Community Text Alert. Initially, we had a basic SMS text message offering which met the initial needs of our subscribers. We have grown substantially since then, based on feedback from our groups. We now operate from a multi-channel platform to issue alerts from, such as landline, email or by smartphone app. We are also offering information alert on weather alerts, water outage notices and county council alerts. Additional services extend to any groups who wish to avail of custom services, who need a variety of alert services. For example, we provide notification services for Group Water Schemes and Sports Groups, among others. Our Text Alert service is used by the Kilkenny GAA Supporters Club and is responsible for their ongoing communications with their huge membership.

Our mission statement for CommunityAlerts.ie, is to allow communities to easily set up and manage a community alert service. Our prices are set at an affordable and competitive level to ensure that your Community Alert service is sustainable for the long term. Alerts are delivered in a timely manner to ensure that everyone learns of a serious event as quickly as possible. We have come a long way since we began with Community Text Alert and we will continuously strive to provide the best and most competitive service to our existing and new customers.